right now the forecast for this area is 1.2 inches of rain over the next 24 hours.   If this is slow it is no threat.  If it is in 30 minutes big problem.

amazing hurricane Sandy is so late in the year, this has to be record setting....

BPE wrote: I checked out the great comparison on the years 1997-1998 to 2015 of the hurricanes and found that with strong El Ninos that the Baja had no hurricanes for those years. So hoping that this will hold true. Here are the comparisons for similar water temps:

Any comments on this would be very enlightening, high water temps, strong El Nino and no threat of hurricanes. As seems we might be all ok this year.  (unsigned)

Now that I have a good diesel generator we will not get any hurricanes. It has scared them away I hope... The power of being prepared better.

no rain from it to date, today beautiful clouds, great waves to play in.     still blustery winds and cool at 89 degrees a pleasant change. I do not know the water temp but it was cold entering the water today.

starting to get some waves and some winds 3-15 gusts from the mountains.

Hurricane deloris coming.. time to stock up with fuels and water, have plenty of food... 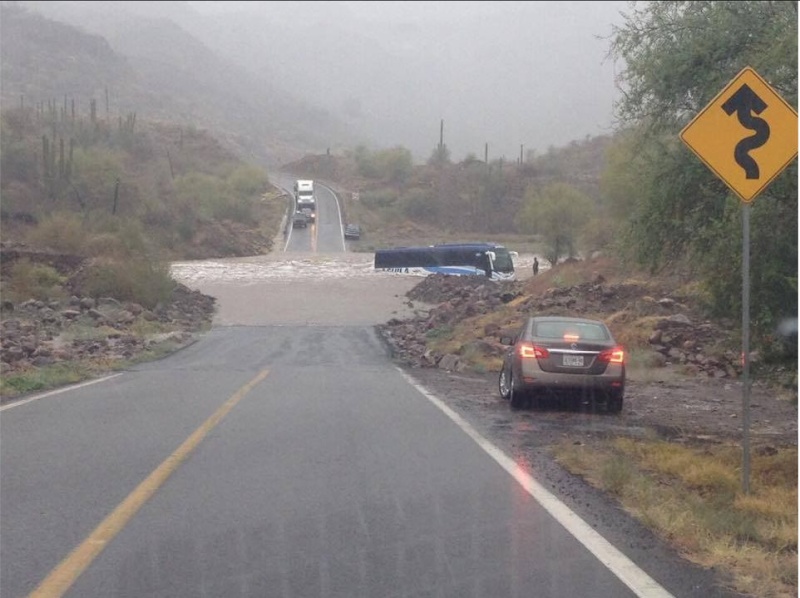 well it is dark but it does not look like we had any more rain.    For the most part we have electricity with a few places in the area that do not.   we presently have a consistent 5mph  and 15 gust mph breeze that is very fresh/dry and cool at 79 degrees.   I just have one paladearco wall/fence  that needs resetting from the rain period yesterday evening.  It was damaged originally by Odile and more so termites.

noon; we finally do not have the gusts coming fromthe mountains and south...   but now warm and humid. hottest day this summer so far now at 90 degrees.

5pm temp back to 80 and humid but comfortable. 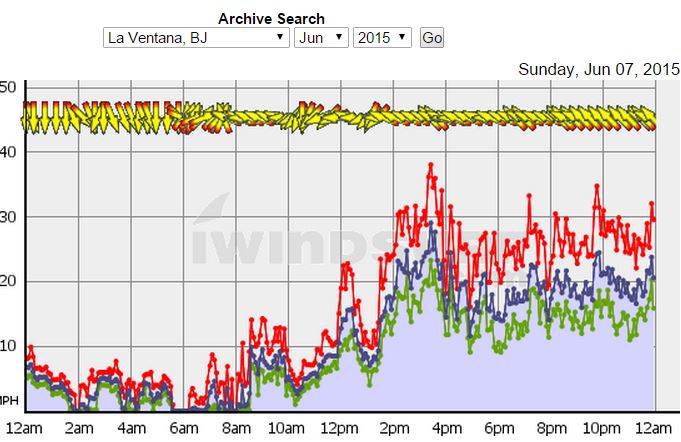 10:40 air is thick can not see the mountains around us or the island right now

5 pm and we have real rain not amounting to much and we have wave action and real consistent wind 20 ish with gusts.    peak is to be tonight-tomorrow about 4 am.

BPE wrote:6-7-15 @ 7pmBT:  Power has been out.  Very "windy"  and earlier I felt sand hitting my face when I was out on the patio.  We are in  "downtown" LB. three doors north of Verdugo's Park on the beach. We had maybe 25 drops of rain!
Most of the day the wind was from the east and now it's clocked to the south.

8 pm just went for beach walk.   strong wave action with high tide meeting peak wind so could have some erosion issues tonight early next morning.    I have a few more pictures. will post later.  One thing I note is it is cool winds vs Odile it was warm.  Both are very humid.

9:30 pm, looks like a lot of lavntana has lost electricity, the grave yard seems fine.    Also heard north el sargento a pole or transformer caught fire so some may have lost power.

also heard since the storm was downgraded the extra CFE contract workers were recalled early today.   They did spend the night here in LV.

11pm no major change, just wind at about 20 mph and gusts no rain.  time for bed.   very nice sleeping weather 78 degrees.  the gigger winds waves should be 2am to 4am. 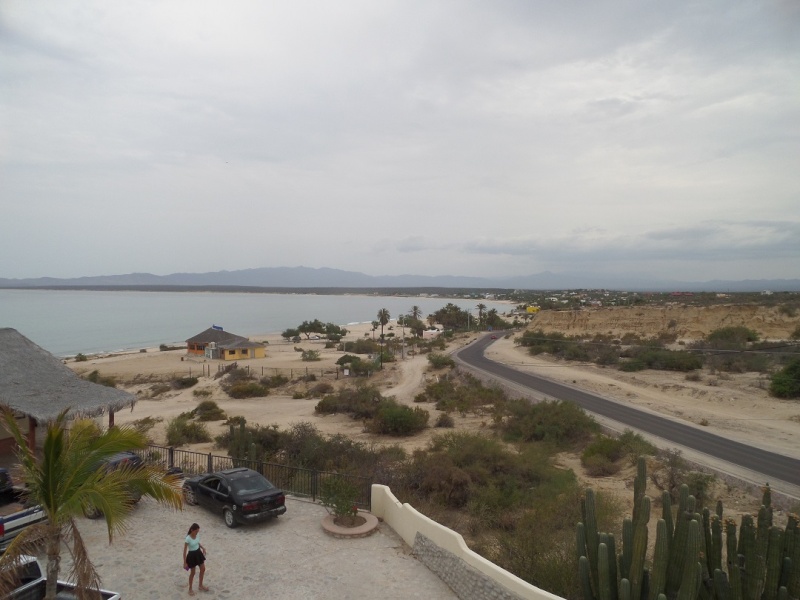 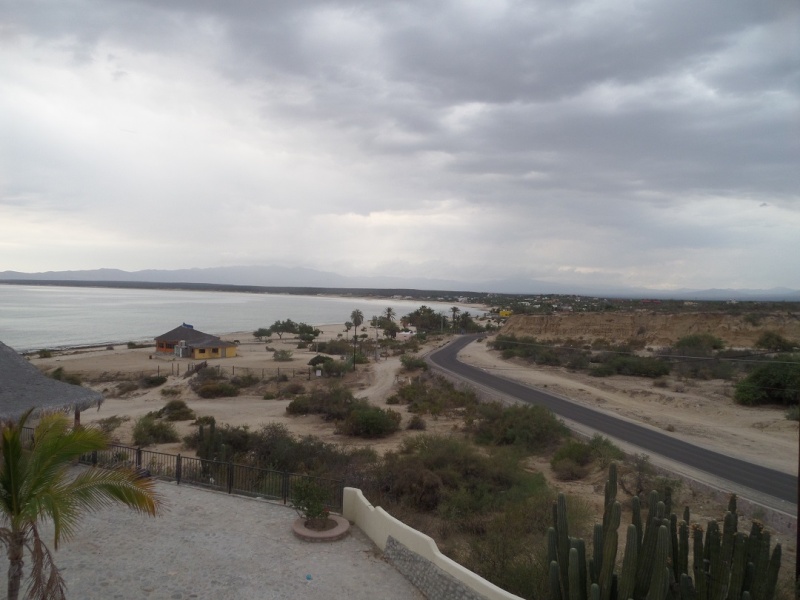 see close in the sand picking up at the dunes area.   afternoon the 7th. 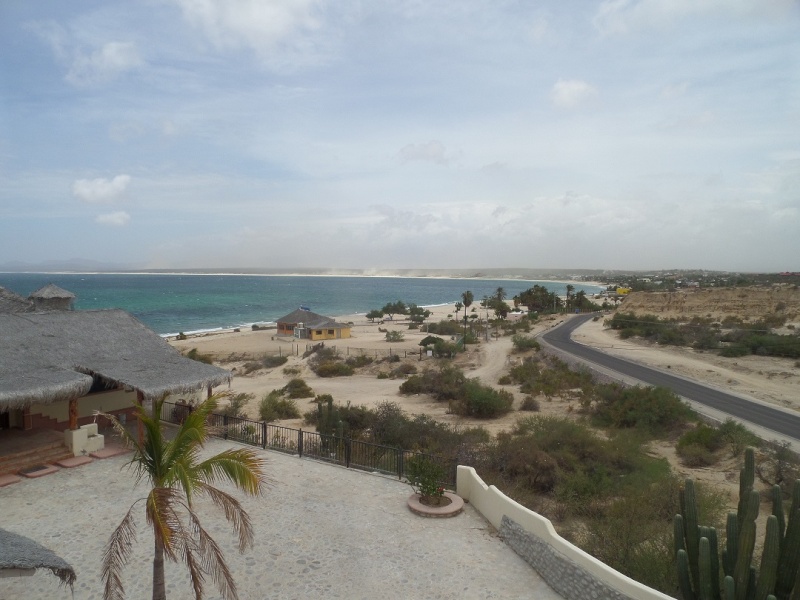 and final evening shot after the only real rain we received. 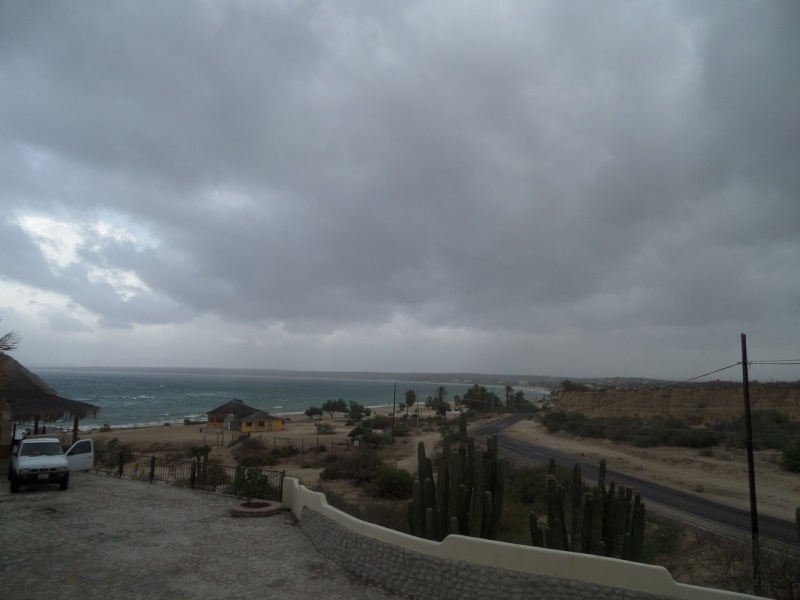 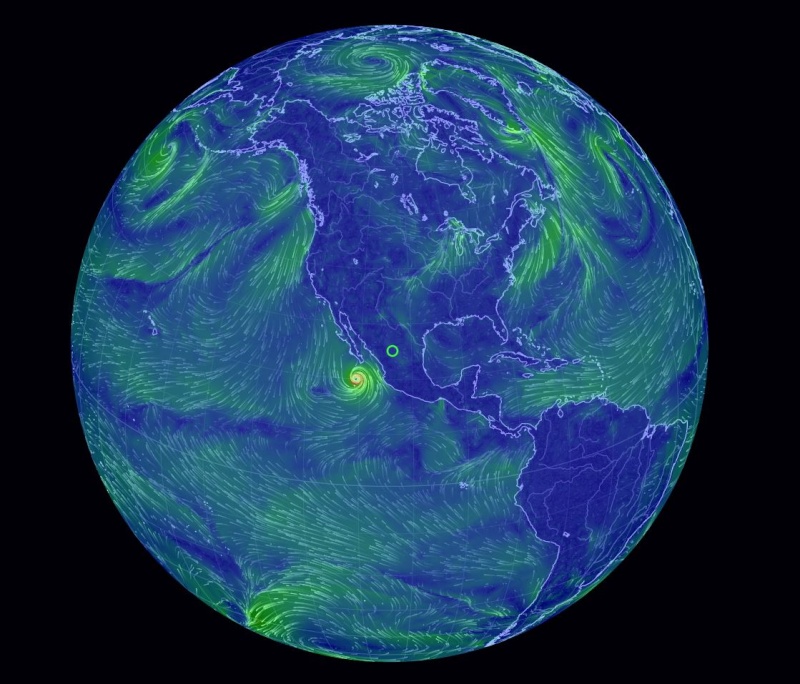 for today, cloudy very humid but no rain yet.

getting a few drips of rain now.  just drips.  will take first picture shortly and post.

9pm no drips than those earlier.

For hurrican John CFE sent in about 1000 workers to baja from the mainland before it hit.     Odile everyone was caught off guard and they did not get here for days because the ferry had to bring food and water and the military.      Well we have our own electrical crew from the mainland with about 5 trucks that arrived today IN LAVENTANA.    I actually saw them drive in.  These are contract workers like the guys who fixed us after Odile.   WOW....    Thus if poles do go down they have a truck for digging holes here, they have two for getting up on the poles and support trucks.    Assuming that it will not be knocking things out in the main transmission lines we could be up and running in a few days if we do lose power.

here is current picture of Blanca 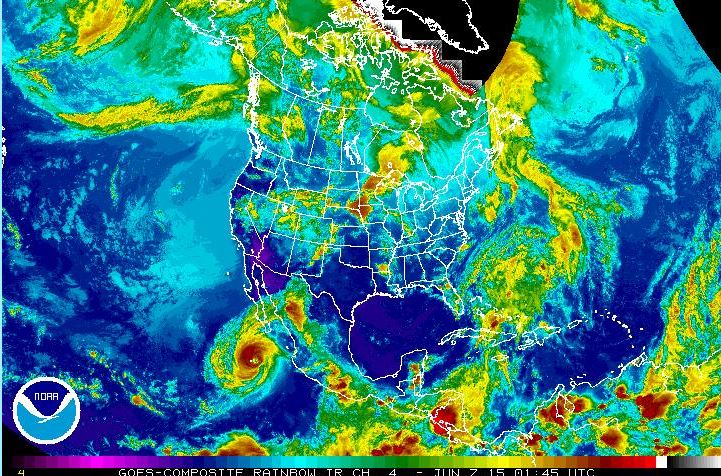 In this regard, Eleonora Romero Vadillo, professor and researcher of the Academic Department of Biology Marinade UABCS reported that this prediction, as the paths of hurricanes, is based on oceanographic and atmospheric conditions present. However, he added, those conditions may vary by distintitos factors. For example, last year 17 events of this type were expected and in total there were 21.

Tropical cyclones are phenomena that form in the tropics between 15 and 30 degrees north. There are other types of cyclones, such as extratropical, formed farther north and the Arctic, which are hurricanes cold water.

Doctor said it's important that people know that although the 19 predicted cyclones formed, does not mean that everyone will get to BCS, so not to cause alarm among the population; although it should take precautions to avoid preventable mishaps.

"Of the hurricanes that form in the Pacific, most traveling northwest, away from the coast of Mexico. In the first months tend to impact the southern states like Chiapas, Oaxaca and Jalisco. As advances season, usually recurve to the northeast, when stuck in BCS, it would be from the month of July, "he said.

As the average of phenomena landfall in the state, Romero said Vadillo generally ranging from 1 to 2. Many approach the south Californian coasts, but not always landfall.

Moreover, he said that this year has the characteristics of "Year Niño" weather phenomenon that occurs when winds generally blow towards Ecuador. There are years when those winds are weaker and warm water, which is normally biased to the west side remains America and distributed to the north and south. This causes the water are warmer.

Finally, the researcher invited the South Californian society to be alert to forecasts and above all to follow the official website of the National Weather Service, National Water Commission and the National Hurricane Center of the United States to be well